Even the international press denies the recovery of the Spanish economy that sells the Government of Pedro Sánchez after the impact of the coronavirus crisis. The British newspaper Financial Times has assured in an article published this Monday that Spain has become the economic lap of the eurozone due to weak household spending and supply chain bottlenecks that are affecting the GDP rebound after the pandemic -without forget the runaway inflation that already stands at 5.5% -. A context that has caused up to ten institutions to knock down the Executive’s forecasts for this year, the last one being the Chamber of Commerce.

The text of the British newspaper specialized in information of an economic nature indicates that: “As the largest economies in the European Union (EU) recover from the coronavirus crisis, one is far behind: Spain. The country, the most affected in Europe by the economic impact of the pandemic last year, is making much less progress than other members of the eurozone in recovering pre-pandemic production levels. 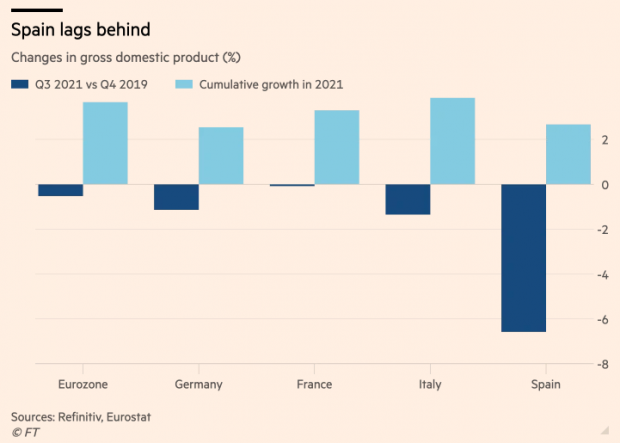 Financial Times cites experts who warn that “at this time there is cause for concern”, as is the case of the chief economist of Singular Bank, Alicia Coronil. Information that matches that of Raymond Torres, chief economist of the foundation of savings banks in Spain, who warns that “the recovery has been delayed compared to other countries and compared to expectations.” Meanwhile, from the Ministry of Economic Affairs – portfolio of Nadia Calvin– turn a deaf ear to the warnings of economists, national organizations, international institutions and even the press.

Wavering household consumption, rising energy prices which has contributed to a great extent to unleash inflation and a delay in the use of the recovery fund of 800,000 million euros of the EU have caused this delay in the recovery of the economy, according to the British newspaper. All this, despite the fact that Spain is one of the main beneficiaries of European aid with 140,000 million euros in grants and loans for the next six years.

«After 18 months in which the economic performance of the countries closely followed their struggles with the pandemic, the Spanish experience represents a kind of dissociation. Spain has some of the lowest infection rates in Europe, but that does not seem to be providing a economic boost in relation to their neighbors ”, reads the article.

Far from showing the colors to Pedro Sánchez, the President of the Government continues to boast that the economic recovery of Spain, after the impact of the pandemic, is a reality. «We save many jobs by temporary employment regulation files (ERTE), benefits to the self-employed and concession of ICO credits with a faster, fairer and cleaner economic recovery than in 2008, “he said at the opening day of the 17th Congress of the PSOE Aragon.

Sánchez argued that the pandemic “has shown that there is only one way, to move forward or to go back; and progress is that of social democracy, which is committed to growth, but also to a fair distribution ”of wealth and citizens have realized that it represents “An equitable and more efficient response from an economic point of view than neoliberalism”.

The Hawkeye series will not forget the dark past of its protagonist and will have weight in the story – Bayl.eu

20 years is nothing! The reunion of the Harry Potter cast - Bayl.eu

Watch out for this Animal Crossing New Horizons bug when remodeling a house - Bayl.eu

A mother poses as a teenager to help arrest sexual predators (and shows the process in a series) - Bayl.eu